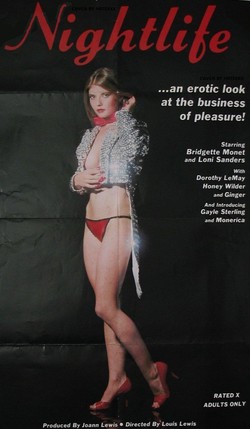 Bridgette Monet stars as a pretty young prostitute who works in a well-known house of ill-repute. Her best customer is David Smith, a millionaire who yearns to take Bridgette away from the world of pay-for-play passion. She refuses to leave the life, though, even when David offers to marry her - scintillating sex is just the ticket, though. The rest of the gals in the brothel have got their own clients to deal with, and we get to peek in on some totally unhinged action. A psychiatrist's own mental hang-ups are soothed via some two-on-one fun with Dorothy LeMay and Loni Sanders. One client has his own visions of what's erotic, so he puts his hooker on a trapeze that's suspended from the ceiling. They engage in a wild oral romp in which she hangs upside-down throughout. Honey Wilder also turns in a great scene, paired up with Michael Morrison in a slam-bang session that's more 'normal' than the rest of the action, but no less arousing.