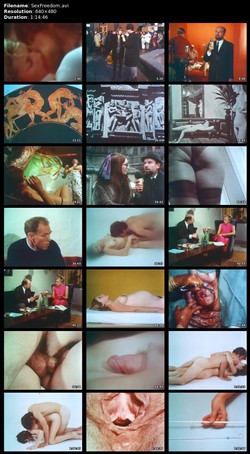 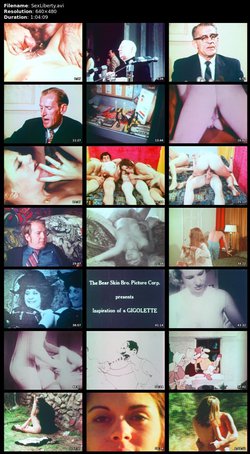 Sexual Freedom in Denmark (1970)
Starting as a documentary on the sexually liberated culture of late-Sixties Denmark, Sexual Freedom in Denmark winds up incorporating major elements of the marriage manual form and even manages to squeeze in a montage of beaver loops and erotic art. All narrated with earnest pronouncements concerning the social and psychological benefits of sexual liberation, the movie, is a kind of mondo film dotted with occasional glimpses of actual sex. Tame by the standards of 1971, when adult loops and features would begin to flood certain metropolitan markets, the film was shocking enough in 1970 to instigate media attention and long lines at the box office.

Sexual Liberty Now (1971)
The Sed Ed (or marriage manual) film is one of the most significant genres in the history of American adult cinema. As peculiar as it may sound in an age of virtually limitless smut, it was not too many decades ago that explicit representations of sexual activity were considered both morally and legally indefensible, a pure manifestation of that constitutional bugbear known as obscenity. Even though soft-core sex-exploitation films had been gradually pushing the envelope during the 1960s, the notion even among producers of such films that real-life sex would one day find its way onto American movie screens would have seemed like sheer science fiction right up to the end of the sexploitation era. Although illegal stag films depicting sex had been around since at least the 1920s, the convergence of publicly exhibited, 35 mm features with the illicit pleasures of a private Elk s lodge smoker was a cultural and legal development few would have anticipated.