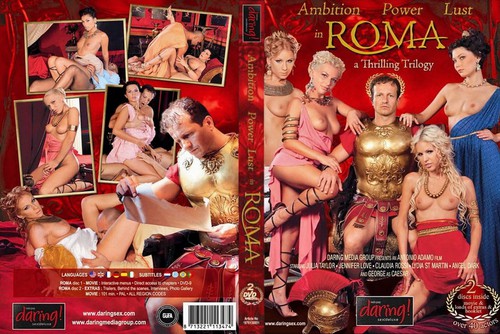 Roma 1:
Ambition... Power... Lust... Year 51 B.C.. After 8 years of war, the Caesar Triumphs in the war against the Gaul. There are celebrations for the victory and the return to Rome. Meanwhile, in the capital of the empire, Pompeo, Senator loved by the people, loses his wife, the first daughter of Caesar. Caesar, informed about a plot from the senate against his downfall, decides to re-enter Rome in full force. The army at the head of which ride centurion Lucio Voreno and Legionary Tito Pullio, arrive in Rome to find an empty city without institutions. This causes the senate to declare Caesar a dictator. Pompeo, in order to avoid the civil war, leaves Rome with his wife and the rebellious senators, and exiles himself in Greece. meanwhile, Lucio returns back home, and realizes that his wife has changed and Tito Pullio and Ottavia uncover a hidden plot...

Roma 2:
Caesar reenters Rome where he meets his old flame Servilia and restablishes his relationship with the woman. Azia worried by the love story between them, covers all the walls of Rome with sketches of Caesar practicing sex with Servilia. In Rome, fights between Azia and Servilia become more and more deceitful and perverse. Meanwhile Lucio and Tito anticipate Caesar and they comes back to Rome. Tito decides to free the enslaved Odessa.

Roma 3:
Caesar re-enters Rome. He reorganizes the Senate and he makes that they proclaim him the Emperor of Rome. Feeling worried about the Senators’ malcontent, he places faithful Lucio at his side, proclaiming him Senator. Tito Pullio finds out that Odessa does not love him and that she has a slave as a lover. Tito kills the man in Lucio's house. Caesar is alone against all the rebellious senators and he falls into a trap, with Brute among his assassins.

Email ThisBlogThis!Share to TwitterShare to FacebookShare to Pinterest
Labels: Spain